‘This collection flickers with language as quick as the fish that swim in the poems, as the butterfly whose “light interference” is as real as it is suggestive, as illusory as it is sensuous. 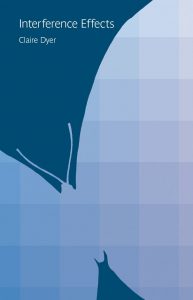 Meaning turns in a flick of a word, a phrase, an image, the familiar made strange: family love, sexual love, grief are turning silvers in darkness, the other side of the ordinary.’ ~ Gillian Clarke

‘Everything here is thrillingly both “itself and something other”. Like little translations or ventures into “as if”, the poems draw us into a re-invigorated world of fishy glittering and butterfly glint. Dyer tells us the Chinese character for “poem” is “word-temple”; her poems are themselves little temples we enter dusty and over-familiar yet exit more alert to the world around us and our inner weathers.’ ~ Martyn Crucefix

‘With her mastery of the line, punctilious ear, sharp observations, and clever image-making, Claire Dyer is a poet’s poet. Interference Effects derives some of its themes, rhythms and forms from the ultimate poet’s poet, Elizabeth Bishop, while retaining a psychological acuity and distinctive voice that belongs uniquely to Dyer.’ ~ Kathryn Maris